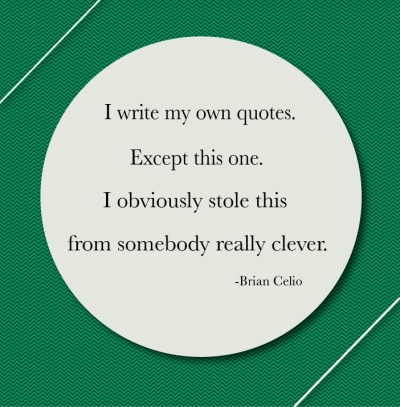 This quote demonstrates precisely what I am doing, here.

But, remarkable quotes don’t always have to come from public figures or famous philosophers. Profound and inspirational statements happen every day. My friend Beckster and I found a couple of exceptional ones in the restroom stalls of Casino El Camino in Austin, TX.  Anyway, many of these daily profundities go unrecognized, so I made some graphics of quotes I snatched from fellow bloggers, friends, family members and inanimate objects. 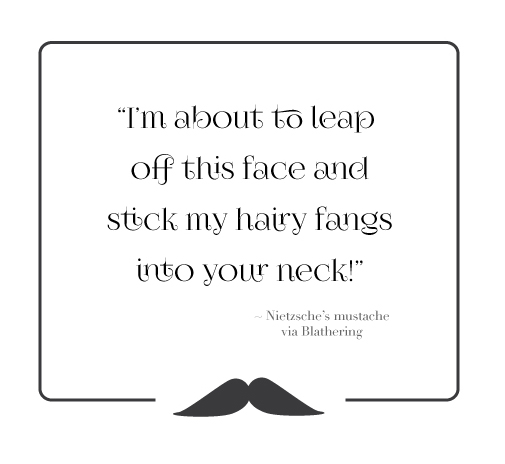 Nietzsche’s mustache is a profound entity in and of itself, and deserves to be revered as such.

I love that this statement comes NOT from Nietzche himself, but from his glorious and mighty mustache in: The history of Nietzsche’s mustache. Blathering writes a lot about the marvel that is Nietzsche’s mustache in her blog: It Keeps Me Wondering. If you have an aversion to clever writing, or laughing so hard you might accidentally pee your pants a little, you may want to avoid her blog. I can’t seem to make it through a post without having some sort of accident… 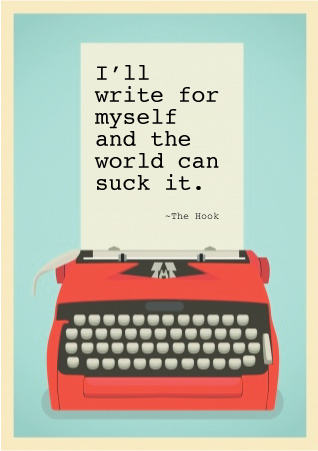 I find this statement to be empowering because it basically says:

I will continue to move forward with my communicative endeavors regardless of the good opinions of others.

Only, in a no nonsense, bad ass kind of way. I like it because I spend so much time and energy fretting over what people might think or say about almost everything I do. The part of me that frets could use a dose of  the no nonsense bad-assery that emanates  from The Hook‘s words. 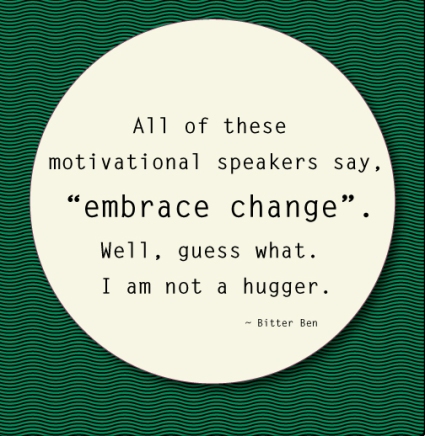 I would like to premise my commentary on this quote by saying that I do believe in the power of embracing change. However, I think Ben has a point.  Sometimes, something  crappy happens and you genuinely feel like crap. Seeing a bunch of quotes that say things like: “Choose Happiness” when you feel like dirt, can make you feel more like punching someone in the throat than choosing happiness at that moment.  It’s okay to let yourself feel what you feel when you feel it (as long as you don’t actually punch someone in the throat….that would probably be bad). There is much wisdom in Ben’s Bitter Blog. 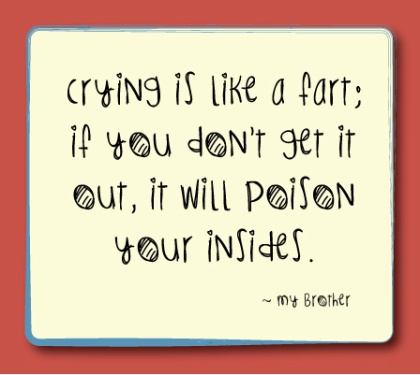 *My brother has accomplished a lot of nifty things in his life, like having 3 amazing kids and becoming an interventional cardiologist. But I don’t know if I’ve ever been more proud to be related to him than I was when I heard this. Typically, I was the one who cried, and he was the one who farted, but if the situation presented itself in the reverse, it wasn’t quite the same.

Societally speaking, there is a lot of social pressure for men to hold back tears, yet it is perfectly acceptable for them to communicate with one another via flatulence. Conversely, women are inadvertently discouraged from experiencing bodily functions, but if something really sad happens, it is socially okay for them to cry. My brother seems to have captured this double standard for both genders in one fell swoop. There is probably some medical relevance to it, too.

*I may have exaggerated a weeee bit about how proud I was hearing my brother say this, vs his other attributes , but I still felt pretty proud 🙂

Ultimately, I found way too many quotes than I had room for on this post. I’m just going to have to do another!

32 thoughts on “I’ve Become a Quote-napper”