I rarely share my opinion on matters of debate because I am, quite frankly, a neurotic people pleaser. Sharing my opinion would mean entertaining the possibility that someone might not like it, and therefore in my mind, not like me. The thought of someone not liking me is up there with the thought of having needles poked in my eye – something I’d like to avoid. But, I’m going to bite the bullet (pun intended) and share my opinion, here,  anyway. 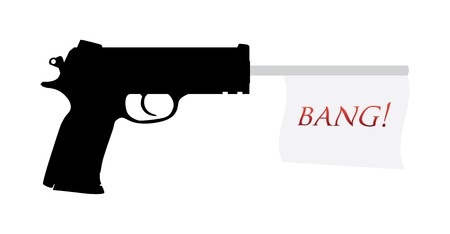 I’m not sure exactly when it happened, but at some point, the “United” States of America seems to have become a divided nation of red states and blue states. Red states associating with conservative ideals, and blue states holding more liberal ideals. I am from Wyoming, and live in Texas – two extremely “red” states. But in my wanderings through life, I have come to identify with several “blue” state ideals.  Having friends and family ranging from one end of the spectrum to the other, I do my best to evaluate both sides of an argument as equally as possible. Trying to see things equally from both sides, however, has been disadvantageous for me. Disadvantageous in the way that jumping into a medieval torture chamber is disadvantageous. My mind is pulled and stretched into so much cerebral discomfort that I am forced to take refuge in ice-cream and baked goods.

This is what I’ve done with the gun debate. I want to fully understand where each side is coming from and why (ice-cream is standing by).

Those who are opposed to gun control feel that it would be a violation of the 2nd Amendment right to bear arms. Guns, they argue, function as a means of home protection as well as a line of defense in the event of a hostile government take-over. “Guns don’t kill people. People kill people.” The fact that Mexico has some of the strictest guns laws, yet maintains some of the highest rates of gun violence is another argument against gun control. These concerns are valid, and I can appreciate where they come from, but my work in the field of suicide prevention has led me to take a serious look at the other side of the debate as well.

The Centers for Disease Control listed firearms as the #12 cause of all deaths between 1999 and 2013, representing 1.3% of total deaths in the United States. They were also the #1 method of death by homicide (66.6% of all homicides) and by suicide (52.2% of all U.S. suicides) gun control – ProCon.org.

Seeing that guns are the #1 method of deaths by suicide stands out to me because at one point, I struggled with thoughts of suicide myself. Although it’s been quite some time, and I now turn to Ben and Jerry when I feel stressed, it wasn’t always that way. I recall how useless and hopeless I felt when I was in the midst of my deepest depression. I really thought the world would be a better place without me. Those thoughts became all consuming. They clouded my judgement the way driving in a snowstorm clouds your vision. You can’t see 5 inches in front of you let alone see a light at the end of the tunnel. I did not have access to a gun when I was at my lowest, but I’m not sure what might have happened if I did.  Eventually, the storm cleared, and I was able to get through my depression and start to heal, but I still don’t feel that owning a gun is the right method of home protection for me. While I respect the rights of those who do choose to use a gun, I would like to propose an alternative, possibly equally effective form of weaponry for home protection: The Archer’s Bow and Arrow. 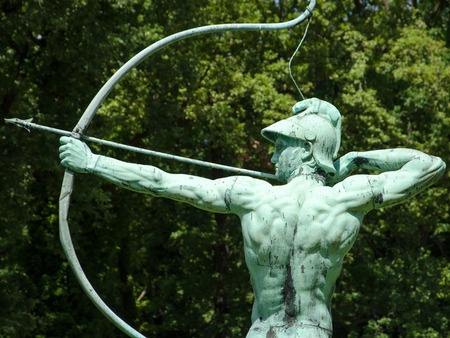 The bow was an important weapon for both hunting and warfare from prehistoric times until the widespread use of gunpowder in the 16th century (1). Firearms became the favored means of warfare weaponry because soldiers could easily shoot at each other from behind barricades, and they required significantly less training to use than did bows. Archers thus became obsolete on the battlefield. But, the bow and arrow still functions as a highly effective weapon for personal protection (this information was derived from wikipedia here and here).

If you’ve ever watched the Walking Dead, the character Daryl’s use of the cross-bow is a perfect example of this. Not only is he able to ward off loads of zombies, but he holds his own with that cross bow when it comes to able bodied attackers as well. Then, there is Katniss Everdeen who managed to overthrow an oppressive government with a single arrow in the Hunger Games Trilogy.

While I say this partially in jest, I can’t help but wonder what it would be like if we were a nation of archers.

Mass shootings would probably be a bit more difficult, and I can’t recall the last time I heard of a bank being robbed at the point of an arrow. I couldn’t find any statistics on homicides or suicides by bow and arrow, but I’m going to guess they are fairly low.

Replacing something that works as instantaneously as a firearm with something that requires just a moments more thought, isn’t going to solve all issues of violence, but it may help to minimize the damage of some of these issues.

Due to the complex nature of human behavior, I don’t think there is one, cure-all solution for the gun debate, but I do think those who wield a bow and arrow for personal protection are incredibly bad ass.

Disclaimer This post is intended for entertainment purposes only, and is by no means intended to function as a political platform. However, if it were, ice-cream would be included as would baked goods.

31 thoughts on “A Proposed Solution to the Gun Debate”